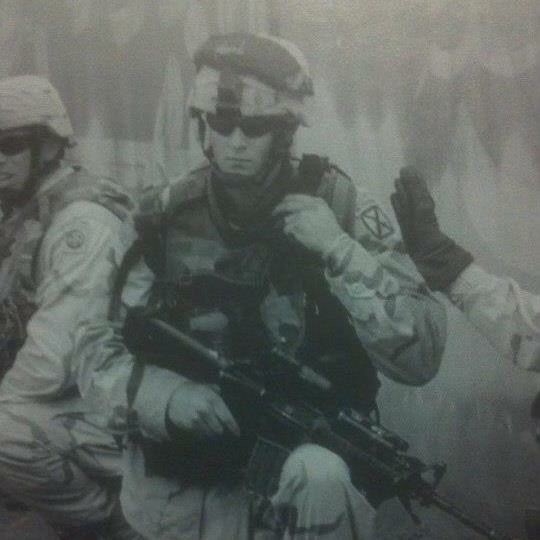 “Down But Not Out” by Andrew Smith Published by Military Experience and the Arts. Dec 9,2012

I grew up in a great home with dedicated parents and two awesome brothers. My childhood was typical for a home with all boys. Sports, 4-wheelers and guns filled up our afternoons and life was never boring. Basketball was my passion and I played through high school and college. I loved the competitive nature of the game and enjoyed seeing all that could be accomplished when a team worked together. I joined the Army halfway through my sophomore year of college. I originally enlisted in the Reserves but, after many conversations with a former Ranger, I went Active Duty Infantry.

I was stationed at Ft. Drum, home of the Army’s 10th Mountain Division. We deployed to Fallujah, Iraq in September of 2003. On our first combat mission, the vehicle I was driving was hit by an IED. I suffered shrapnel wounds to my left leg and a traumatic brain injury. (The TBI was not diagnosed until 2006).
After 2 surgeries and over 30 days in the hospital, I returned to my unit and began to continue with combat missions. On November 2nd 2003, a Chinook helicopter was shot down outside of Fallujah and we were the first ones to respond. When we arrived there were a large amount of wounded and a total of 16 KIA. This event is one that has dominated my days and nights since.
After 12 months in Iraq, we returned to the states and back to our “normal” lives. When it became obvious that due to my shrapnel wounds I would not be able to continue as an infantry soldier, I transferred to a different unit. This time was very hard because I was pulled away from my closest friends and leaders. I began to drink very heavily to try and forget about what I had went through and to numb me from what was ahead. I hated being stuck in the Army because I was now in a unit where I did not know anyone and had no real purpose. (I was going through the process of being discharged.)
After I had been home for 3 months, I married the girl of my dreams and could not have been blessed with a better wife and friend. The problem was that she was in the middle of a school year teaching in Georgia while I was awaiting my discharge in New York. So from December 2004-July 2005 I numbed my pain by drinking each and every night. Looking back on this time in my life, there are many things that I would do different, but the one obvious one is my drinking. Alcohol does nothing to help any problem you may have and in most cases it just makes things far worse. I made the decision to stop drinking the day I got out of the Army and I have not had a single drink since then.
After leaving the Army I still had many issues that I needed to deal with but sometimes I felt so overwhelmed by all of the symptoms that I was too worn out to even think about the problem. Anger, fear, depression, and paranoia dominated my days and the nights didn’t get much better. After talking with many different counselors I finally found one that really did make a difference in my life. She took the time to walk me through the different situations I was facing in my life and really opened my eyes to things that I needed to work on.
When I was 12 years old I made the decision to ask Christ to forgive me of my sins and I put my faith and trust in Him and Him alone. While I didn’t always act like a Christian, I knew that deep down He was still there for me and He had always been. As I became more involved in my church and with helping other people get through their own trials, I began to notice that my own issues were growing smaller by the day. As life got busy with kids and work I found that I didn’t quite have enough time to dwell on my past and live my life too. I DECIDED TO LIVE!!!
Since 2005 I have had the honor of being a basketball coach, a youth pastor, serving on the Board of Directors for a non-profit and speaking at different events around the country. I am still with the awesome girl I married in 2004 and we now have 2 kids and another one on the way. God has opened many doors for me to help wounded warriors and others deal with PTSD, TBI and many other injuries and I am honored each time I get to spend time with some of our Nation’s finest.
It would take many pages to list all of the amazing people that have helped me since I was wounded and I am sure that I would forget to list them all. To the ones that do read this, I thank you for everything you have done for me and I want you to know that you made a difference in my life and my family’s. To the Soldiers and Marines that may be reading this wonder how you will make it through the rest of your life; I encourage you to take it a day at a time. God has a plan for your life and while you may not see what it is right now, He can.
Be honest with those close to you in regards to what you are feeling and thinking and be willing to let others help you along the way. There is no shame in allowing others to be a blessing and an encouragement to you.
“Although the world is full of suffering, it is also full of the overcoming of it.” – Helen Keller