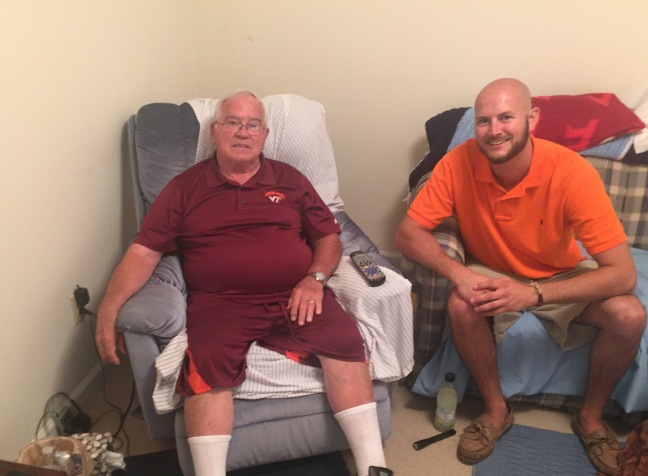 If you follow me on social media then you probably noticed that I went to the game last night. You saw that I was there for “Enter Sandman” and even spent time hanging with the Hokie Bird.

But social media doesn’t always tell the whole story…and I wanted to share the rest of it with you today.

Right before Tech scored their first touchdown, I had already left the game. It wasn’t because we were down 14-0, but because I had somewhere more important to be. I left so I could go watch the game that I was at…on TV.

Some of my earliest memories in life revolve around Virginia Tech athletic events and it was my Grandpa that was right beside me at each of them. We would park at the old..old Blacksburg high school and walk together to Lane Stadium. He would tell me about each player’s strengths/weaknesses and give his prediction for the game. Some of the games we went to were huge victories for VT but that was never the best part of game day in Blacksburg. Here is what was:

1. Being with my Grandpa.

He could have gone to the games with anyone, but he took me. He bought me peanuts, milkshakes and pretty much anything else that I wanted. He would throw football with me before the game and answer any questions that I had during the game. He wanted me there with him and there is absolutely no where else in the world that I would have rather been.

2. Being with our Friends

In the late 80′ and into the 90’s, you would see at least 200 people you knew every time you walked into Lane Stadium. As a kid, it was so much fun to meet up with people at the games and spend time together in such an awesome atmosphere. The same still holds true today. I love seeing so many people that I know each and every game day. Even as Blacksburg grows, it still has such a special small town feel and I pray that it never changes.

Yes… we lost last night, but I would still rather be a Hokie than a Buckeye..or a Seminole…and of course a Cavalier. The older I get the more I realize how little the actual football really matters.  What I remember most about former VT players isn’t their completion % or their win/loss record, it was when they sat beside me and ate donuts at Carol Lee or handed me their receiving gloves after a game. What I look up to in Coach Beamer is not that he has won bowl games, but that he is a good husband, father and leader. What I am most proud of when it comes to Virginia Tech is not that they recruited Michael Vick, but that when tragedy struck in 2007, they showed the world how Hokies respond.  Unless you have lived in Blacksburg, it is really hard to understand what it means to be a Hokie. If you do understand, then you know there is nothing you would rather be.

So last night when I could have stayed at one of the most anticipated college football games of the season…I didn’t. I walked out of Lane Stadium and went to watch the game with my Grandpa. We talked, laughed and almost cried (Brewer injury). I left his house knowing that life would go on even after a loss because there are many things in life more important than football.  I drove away proud to be a Hokie, not because of our football team, but because I had just gotten to watch the game with the best Hokie I have ever known.